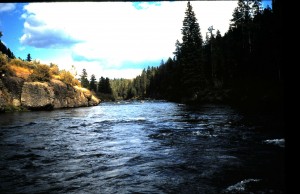 That picture above looks like Box Canyon on the Henry’s Fork,  doesn’t it?  It is taken on Fall River just a few miles below the Idaho-Wyoming border.  To be exact, it was taken between the Boone Creek confluence and the Yellowstone Canal Diversion, the farthest upstream  irrigation take-out on the river.   Fall River in its reach from Cave Falls to the Kelly Bridge,  the furthest upstream crossing a few miles below this diversion, is mostly isolated.  You will not see drift boats here.  There are no developed launch sites upstream of the picture location, there are at least two waterfalls above that would make a portage necessary, stretches of dangerous water, and no developed boat access points in the area of the bridge.   Once in a while a kayak or raft launched at Cave Falls Campground or at the end of the Steele Lake Road may go through this part of the river, but there are some walk-in access points.   Most are off the Cave Falls Road, but one of the most convenient on public land is off the Ashton-Flagg Road, and it brings one to the Boone Creek confluence.  Look for it after passing on the west end of the road through the extensive quaking aspen grove straddling the Targhee-Caribou National Forest boundary.  It will be the first gated road on the left (north) side after passing the  Squirrel Creek Vista.  Park without blocking the gate and walk the road, a bit more than a mile, to its end near the confluence. The last few yards are a scramble down a steep, but negotiable slope to the river edge.  You will be in Idaho here, but much of the river above is  in Wyoming.  Most folks think of the river here as one long set of rapids holding only small fish.  Not true: within this reach of the river are a number of  large, deep holes that host cutthroat-rainbow trout in sizes that would honor any regional river.  There is one at the Boone Creek confluence, and another about a half mile below.  That one is pictured at the base of the rock outcrop in the picture above.  Walk upstream above the confluence, and you will see more such holes.

The problem with fishing here is the treacherous nature of Fall River. It is notorious for a slippery, rocky bottom. In the early season, about mid June when large stoneflies are emerging, the river likely holds a  high volume of run off.  Safe wading the river then is only for the strong, vigorous angler.  Crossing the river is not recommended for anyone during this time, but if one can approach the water around these big holes, a dry adult stonefly pattern or a deeply presented nymph has a chance of bringing up residents ranging to well over twenty inches.    By mid summer run off is gone from the river (so are mosquitoes!) making it safer to wade the uneven and tricky sub surface. Rely on felt soles and a wading staff.  At this time, and well into September, terrestrial patterns, especially large grasshopper or attractor patterns are the best way to get the interest of the larger trout holding in the big holes.  Large stonefly nymphs and streamer patterns or fly rod jigs will work sub surface.  Because of the isolated nature of the river here and that cell phone service may not get into the canyon, it is a good idea to inform someone that you will be fishing here.  Carry potable water, and be aware that bears are in the area, especially during the August berry season.  If you seek seclusion, wonderful scenery,  a good chance for seeing wildlife, and are in good physical shape, this part of Fall River could end up as a destination for you.