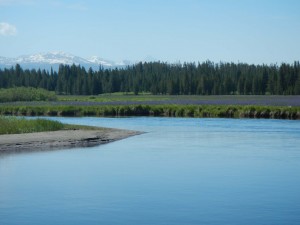 It’s a place of legend, and will stay that way because effort is required to enjoy fishing the river of the same name and Boundary Creek also within.  Both are classic meadow streams, and both can be quite demanding : Bechler River as much as the Harriman State Park reach of the Henry’s Fork, and Boundary Creek as much as Jackson Hole’s Flat Creek. But there is a major difference. Whereas that part of the Henry’s Fork and Flat Creek can be very crowded in season, there are times when you just may have the streams in Bechler Meadows all to yourself!  The price you pay is the three and a half mile walk minimum, then walk-around fishing, and finally the required walk out. I have noticed that this means as much as ten miles in a day of fishing.  But when you are at these streams at the right time, you will likely have an unforgettable fly-fishing experience.  Here is what happens to attract fish to feed on or near the surface: after run-off leaves the waters, and earthworms no longer plentiful enough to provide the major part of diets, fish experience a progression of aquatic insect emergences. That progression begins with an in-stream emerging yellow sally stonefly, then that of  mayflies. That begins with gray drakes crawling from sloughs out in the meadows. Spinners of these are blown into the stream about the same time that PMDs begin emerging from the streams. The PMDs begin with those of a large size (#14), but with time  seem to quickly reduce to the #18-#20 range.  While all this is going on giant and golden stonefly adults are blown in from the canyon reaches above and below ( the same happens in the Harriman reach of the Henry’s Fork). Then in normal water years around mid July,  green and brown drakes take over as the major aquatic insect species emerging.  Most of the activity will be in afternoon hours as waters must warm to  necessary temperatures.  So that is a major difference from the similar water of the Harriman reach of the Henry’s Fork.  Take your favorite patterns for all of these.  Use the same sizes, and balanced system as you would for the Harriman reach. But there is no need to worry about being there early for the bulk of action; stock up with a big breakfast in St. Anthony, Ashton or Island Park, off the lower Mesa Falls Scenic Route take the Green Timber (aka Cave Falls Road) Road to the Bechler Ranger Station Road leaving on left  just inside the Wyoming border. Park at the station where a crew of rangers is always present. Let them know of your fishing plans (fishing permits are available there), then head for the trail to the meadows but arrive in the meadows by late morning.  Let’s look at hazards. Until the end of July you will experience a mosquito density in the timber like nowhere else outside of Siberia. That makes a good supply of DEET necessary.  Drink water out of the streams here at your own risk. Giardia can be anywhere, so either pack your water or a water purifier. And drink water like there is no tomorrow, because staying hydrated is a must for comfort especially during the walk back to the ranger station.  Do you believe in using sun screen and covering up as much as practical? You will if you get a burn from being out in the meadows in the intense sunshine.  A rain coat is a good idea, and it is your choice whether to wade wet or pack in waders.  Need more information or need items to make your visit a fly-fishing success? stop in and chat strategy, equipment,  get a Yellowstone Park fishing license, and information with us. One more thing. see that picture above? That means do not forget a good camera.