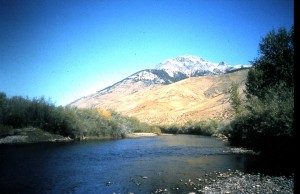 Have you seen Tim’s recent Big Lost River contribution to our fishing report? What he offers is typical for fishing success this time of year on the river downstream of Mackay Dam.  Midge activity and an increasing chance for BWOs appearing as we advance into early spring can make for great winter fishing.  Pick a blue-bird day, string up your four- or five-weight system with a floating line,  and bundle up for a most enjoyable time.  At the time of this writing flows are about 111 cfs out of the dam thus making for easy wading.  That’s typical of flows now as water users begin storing water in the reservoir for the upcoming agricultural season.  Increases to around 200 cfs are possible, but if anything such an action gives fish more overhead cover thus reducing their skittishness.  Right now snow depth is not much along the river below the dam, so access is easy.

In general fishing success  this time of year can be more reliable than during the irrigation season when flows out of Mackay Dam can vary up and down abruptly at times putting fish down for a few days.  The Big Lost River Valley below the town of Mackay relies heavily on agriculture for economic well being, and the demand for water at critical times during the growing season takes priority over any recreational use.  At the end of the agricultural season flow out of Mackay Dam is again reduced as  storage in the reservoir above begins, and fishing success once again becomes more consistent.  So even though great fishing can be had during the summer months, especially when golden stoneflies or flavs are active and terrestrial insects populate banks, it is wise to watch for any abrupt changes in flow.  With reduced flows late in the irrigation season a real feature on the river here is the morning trico emergence.  That brings fly-fishers from all points to enjoy resulting activity.  After tricos wane, it is back to the autumn midge and BWO activity much like the current late winter-early spring activity.  Then as during this time of year it is not a bad idea to have a streamer or wooly bugger pattern along  to try for some of the lunker rainbows that sulk in deep holes and undercuts.

Just below Mackay Dam and around the campground there is good access to the river.  Remembering that you are with in legal actions by staying within the high water level of the stream bed, you can fish anywhere.  Downstream, closer to town, private land prevails and some land owners discourage access. Others, however will grant access to those asking with a diplomatic approach.  I recall an incident decades ago on the river that guaranteed me access over a piece of private land. This happened below town, but likely remains a good strategy.  We had asked for permission to access the river to end a float trip further down the valley.  We were given reluctant permission.  We put in at the Darlington Bridge with most of the trip going through private land.  During the way we picked up all kinds of garbage and offal.  When we ended the trip the land owner came out of the field he worked in. When he saw the load of garbage we had, he asked if we had picked it up along the river in his property.  To our affirmative answer he offered; ” If you did that for me, you can come here any time you want to fish!”  Another incident got me trespass permission just outside of Mackay. We were within the high water level of the river, but the observing land owner  reminded us to stay within or we would be trespassing.  Luckily I tied into and landed a rainbow a bit under twenty inches as that land owner observed.  On reviving the gorgeous rainbow and releasing it, the landowner offered “That’s great!  Now I can enjoy that fish. C’mon back any time you want to fish here.”

Most folks in the valley want you to enjoy the exceptional fishing the Big Lost River offers for miles below Mackay Dam.  Your visit has economic value.  There is our usual stop for breakfast or dinner at one of the fine restaurants in the valley, and we do the same at C-stores for a lunch and liquid refreshment.  If you are coming from afar and wish to fish a number of days on the river, motels or B&Bs here will welcome you, especially this time of year when tourists are few.   So consider a visit to this unusually productive river before irrigation flows make it tougher to fish.