Winter has arrived meaning accessing certain waters is no longer available. To see which roads are closed o the the Yellowstone Park web site and look for road closures.  Sunday, November 3rd is the last day for the 2019 park fishing  season.

Weather like we are having today may be difficult with the snow, wind, and falling air temperatures, but it is almost perfect for success through pitching streamer patterns for migrating browns. This applies to anywhere on the river below lower Mesa Falls to the South Fork confluence.  Dress accordingly!

Flow out of Palisades Dam has been steady at around 2100 cfs for  week.  Further reductions in flow are coming as the Palisades Reservoir water storage season is upon us.   Look for winter to increasingly impede your comfort as you fish on the surface for fish attracted to BWO activity or pitch streamers to those aggressive migrating browns.

Springfield Reservoir is offering good fishing for those presenting midge patterns under an indicator once the taking depth is found. Small black or purple leeches presented on intermediate lines also produce action. Daniels Reservoir is also producing through using the same tactics, but watch the weather before going there via the Dairy Creek Road. Crystal Springs Pond will be stocked with hatchery catchable rainbow trout next week.

Winter has arrived in the park.  Snow is on the ground in most places, and daytime temperatures at or below freezing are the norm. The brown trout runs continue in the upper Lewis River, Madison River ( accompanied by rainbows), lower Gardner River and Snake River at the south entrance. There is not much time left to enjoy these events because fishing season here closes after Sunday, November 3rd.

Flow out of Palisades Dam was dropped from 2300 cfs to 1750 cfs last night. In our last South Fork fishing report (10-15-19) we reported on a dangerous lower river sweeper, which has since been removed.   With this drop of near 500 cfs at this low flow, look for more boating hazards to emerge, fish to be more concentrated in deeper water and further opportunities for walk-in wade fishing.

With flow below Mackay Dam just a bit above 200 cfs  (normal for this time of year is about 180 cfs) wading is safe and even though terrestrial insect are gone for the year, BWOs and midges are quite active. 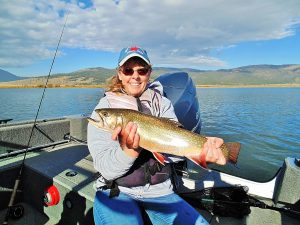 Up to now fish being caught in the 14″ to 16″ seem to dominate with respect to size.  We have a few new reports having some news that larger fish are becoming more active around the lake.  Keep those leech patterns handy!

Remember the comment “This time of year what happens on the lower Henry’s Fork is similar to what happens on the South Fork?”  This is the case with brown trout migrating to spawning areas in both rivers, and presenting streamer patterns being a most effective strategy to encounter them.  For sure resident rainbows ( and South Fork cutties) will also respond to well placed streamer patterns.

Scott Meikrantz took some very informative pictures of an obstruction dangerous to boating anglers on the lower South Fork. These were taken on October 12th this year.  He gives the following explanations on the location of each pic. 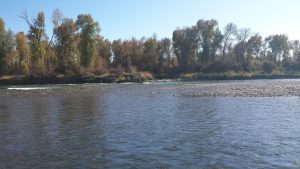 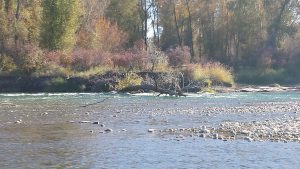 “Pic 1 is on the approach with the sweeper mid-frame; the channel on the bank of river left and the one splitting off the main will run you right into it. Pics 2,3 and 4 are as you drift by staying river right. Pic 5 is your view of river right as you drift by.  The sweeper is about 1/2 mile down from the big rock wall on river right where there are some big homes a ways from the bank.”

Thank you, Scott!  This is solid safety information for anyone float-fishing this part of the lower river.

Streamer fishing on the river is becoming more productive because of aggressive brown trout. Flows had been stable for several days but were dropped to 2300 cfs out of Palisades Dam yesterday.  This action is sure to concentrate fish into deeper water, make float-fishing a bit more hazardous but increase walk-in wade  opportunities.