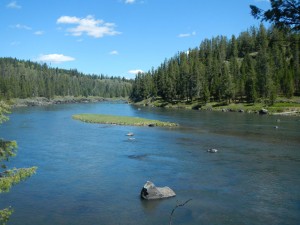 The big attention getter right now is the giant stonefly “hatch.”  Folks come from far and wide to try for that big fish through using a big dry fly.   So some locations can become quite crowded.  Knowing this, I seek out locations sure to be less crowded.  Yesterday I walked into Hatchery Ford from Highway 20 to fish the west side of the river.  Two fly-fishers had walked in from the east side boat access, but they left early.   Only three boats came by  ( that won’t happen at Box Canyon, Warm River to Ashton or Ora to Chester!) during the time I fished.  Action began just after 2PM when big bugs were warmed enough to fly and deposit eggs.  Some olive duns, BWOs, midges and a number of caddis species were also active, but only small fish responding to them.  I did not catch a big number of fish, but had two “hogs.”  All fish I caught appeared to be in early stages of keying on the big bugs.  None were “full of bugs.”  Based on this experience I recommend that during the next few days Riverside Campground to Hatchery Ford will offer some terrific fishing with adult stonefly patterns whether you fish  from a boat or by wading.