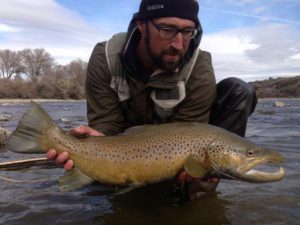 It is probable that the Main Stem Snake River hosts the best brown trout population in eastern Idaho. Currently mature brown trout are in a spawning mode   which begins in late September and extends into late autumn here and in other area streams (lower Henry’s Fork, Portneuf River, South Fork, Warm River). Brown trout sweep out their nests, we call redds, in relatively shallow runs having gravel bottoms with moderate currents of clear, well oxygenated water.  Redds can be seen in this type of water as light colored areas containing indentations and varying in size from that of a broad-brimmed hat to a picnic table.  Sometimes these areas are interconnected. Under low light condition browns move into these to build then spawn.  They leave as daytime lighting increases.  As many as several hundred fertilized eggs can be deposited in a single redd.  Redds are fragile, so should not be disturbed or walked through. Such action not only disrupts structure but crushes fertilized eggs and releases them to drift in the current.  Also, it is not of a sporting nature to try to catch fish in the act of spawning.

Before and after spawning episodes browns move to adjacent in-stream areas offering maximum overhead cover. Typically these are deep holes and runs with structured bottoms.  Here they are “fair game” for fishing.  Streamer and egg patterns presented using sink-tip or full sink lines with stout leaders make a good strategy for encountering them.  Stout leaders allow hooked fish to be played and released quickly thus preserving their energy for the spawning process.  So it is that redds hold what is developing into the next generation of brown trout. Therefore the more redds and spawning fish within are left undisturbed the better are the chances that the next generation will be plentiful.