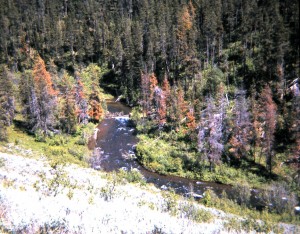 How many streams can you visit and have a chance to catch five different salmonids?   Robinson Creek is likely one of very few in the Greater Yellowstone Area.  It hosts brook, brown, cutthroat, and rainbow trout as well as rocky mountain whitefish.  Robinson Creek flows just inside the west boundary of Yellowstone National Park before turning southwesterly into a deep canyon to exit the Park and flow eventually into Warm River in the “Three Rivers” area  about a  mile above the Warm River-Henry’s Fork confluence. It is that picturesque stream on the right when you descend from the south on the Mesa Falls Scenic Loop into that area.  Soon you cross it just above its confluence with Warm River.  In this area it is mostly on private land, but there are two good access places on public land much further upstream.  These are off the Cave Falls Road, also known as the Green Timber Road.  From Ashton take the Mesa Falls Scenic Loop (State Highway 47)  east about five miles, and turn east on the Cave Falls road to county road 4500 North.  Turn left (north) there and go past Teton View Estates.  The pavement ends and you drop into Robinson Creek’s canyon.  Cross the creek and ascend the other side of the canyon where you will see some pull-outs.  Robinson Creek is on your right down a fairly steep, but negotiable grassy bank.  The picture above shows this location.   The gradient here is moderate, but a series of log plunges established  by IDF&G supplement holding water.  Boulders, deeper runs,  and downed timber also provide cover to this freestone stream.  Trout here run from juveniles to surprisingly large sizes.  Further east on the Cave Falls Road, just after the Rock Creek crossing, take a left to access another location on Robinson Creek.   Go about two miles north past the LDS Church girl’s camp to a turn-around.  Robinson Creek, easily approached, flows through the narrow meadow below.   You can also access Robinson Creek in Yellowstone Park off the Fish Creek Road east of Warm River and after a four mile walk up the West Boundary Trail from Bechler Ranger Station.  Between these locations the creek can be accessed near Horseshoe Lake if one does not mind a bit of rock scrambling down the canyon.  But the two locations described off the Cave Falls Road provide the most interesting fishing.   So do locations into the canyon off  Teton View Estates if you can get permission to access across the private lands there.  Reasons are that the creek is larger at the locations described off the Cave Falls Road.  Another is that as one goes upstream, cutthroat and brook trout dominate increasingly over brown and rainbow trout and whitefish.  Robinson Creek is a runoff stream with origins on the west side of the Madison Plateau in Yellowstone Park.  Thus, the early season on it varies depending on snow melt.  But usually by the first of June it is worth fishing, and wading become less perilous.  The first event of interest is the giant and golden stonefly hatches which ascend the stream.  This is followed by hatches of green drakes and PMDs.  Caddis activity along the stream can be relied on during afternoons throughout the season.  By mid July terrestrial insects become increasingly important food forms for trout, and favorite terrestrial patterns work very well.    Wet wading is also more attractive by this time, and mosquitoes are mostly gone.   A four-weight system using a shorter (7′-7’6″ ) rod is ideal for fishing this stream.  A floating line is all that is needed to fish the stream in these locations given and to present bead head nymphs of small to medium sizes as well as floating patterns.   A 4X tippet  provides enough strength to hold fish here.  Bring a good supply of potable water, sun screen, and protection from the sun.  Light weight rain gear is also recommended.  Late afternoons and early evenings are a particularly interesting time to fish this stream.  Surface activity is at its peak and decreasing air temperatures seem to cool the canyon to comfortable  levels.