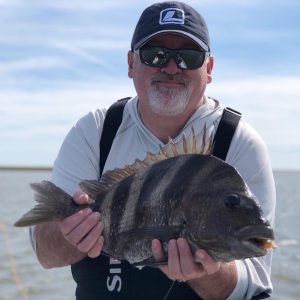 Born and raised in Eastern Idaho on the banks of the beautiful South Fork reach of the Snake River, that is where Gary Barnes passion for fly fishing began.  He started fishing and exploring the South Fork reach at the age of six which evolved into a passion of tying flies starting in his early teenage years. Living near the river by Ririe, he fishes and knows it better than most folks out there.  Gary’s South Fork experience and observations, and those on numerous other waters he frequents, have made him a superb tier, much coming from being self-taught.  Because of this, he reveals some very unique and innovative methods and patterns that catch many different fish species.  Gary’s productive patterns have resulted in invitations to demonstrate many of his techniques at shows and conclaves.  He has fly tying demos at shops and at shows including Eastern Idaho’s Fly Tying and Fly Fishing Expo, Western Idaho’s Tying Expo, Washington State’s The Fly Fishing Show, The Northwest Fly Tyer and Fly Fishing Expo, Western Colorado’s Conclave as well as other numerous FFI Conclaves, and has been a featured tier in Ireland.  Now associated with LOOP Tackle and Semperfli. Gary is also part of the Daiichi and Semperfli pro staffs. Some of Gary’s patterns can be found in various fly fishing books (Modern Terrestrials, Trout Country Flies, Flies for the Greater Yellowstone Area and  various magazine articles).  His focus on tying ranges from trout nymphs and dries, meaty streamers, steelhead flies, as well as saltwater patterns.  He prides himself in classic Atlantic Salmon flies dressed with traditional materials and even forges and makes his own hooks