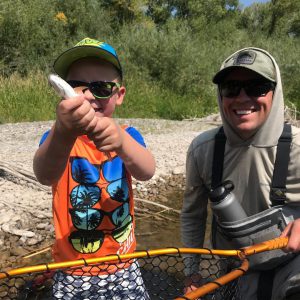 In 1997 at the age of 10, Ben Swaner moved to Idaho and quickly became interested in fly fishing while his family established roots in area. He vividly remembers catching his first large trout in the Coffee Pot rapids section of Henry’s Fork and meeting Pat Bennett (creator of the Pat’s Rubberlegs) through a family friend one summer while visiting Island Park. While attending College at Utah State University, Ben took his first fly tying class using a kit his grandfather had gifted him several years earlier. Fly tying quickly became the perfect fusion of artistic expression and utility for him. He has been fortunate to live in and travel to locations with exceptional fishing opportunities across the west including Alaska.

Ben recently moved back to Idaho Falls with his family and has enjoyed reconnecting with all of the fisheries he visited as a youth. Most recently Ben’s fishing and fly tying inspiration has been focused on European style nymphing. He has gravitated to this approach because of its simplicity and effectiveness in catching fish. His demo will feature nymph patterns that he has found to be effective in targeting trout in our local and regional waters.