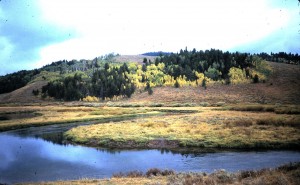 The Blackfoot River Reservoir divides the Blackfoot River in two portions in more ways than physically.  Below the reservoir it flows into a deep canyon not always accessible. Above the reservoir the river trends through stair-step meadows and slower reaches punctuated by what locals rightly label as “narrows.”   Each section has its own particular beauty and character. Throughout, this beautiful river is a stronghold for Yellowstone cutthroat trout with a smattering of rainbows and brook trout.

For now, let’s target the upper river.  The season here opens on July 1st each year to minimize interference  to spawning cutthroat.  For sure, the most attractive location to fish the river is on IDF&G’s 1800 acre Blackfoot River Wildlife Management Area, formerly the Stocking Ranch.  The river begins at the confluence of Lanes and Diamond creeks at the top of the Wildlife Management Area.  In the Management Area it winds, six miles in all, through reverse bends in a vast meadow similar in character to the upper meadows on Yellowstone Park’s Slough Creek.  Pine forests and quaking aspen groves occupy surrounding mountains.  It’s a setting of beauty hard to exceed, and anglers are always few in number.  The most direct route to get to this part of the river is from State Highway 34 north out of Soda Springs, then east on the Blackfoot River Road on up through the “Upper Narrows.”  On exiting the narrows one enters the Wildlife Management Area.    Pull-outs are located at the top, middle, and bottom of the Wildlife Management Area.  Just where the narrows open to the meadows is a well-maintained USFS campground.  Take a look at the mid-September picture featured above.   What fly-fisher would not savor such water and surrounding country!   Each bend hosts a school of cutthroat trout.  Waist high grass and scattered willows provide overhead cover for the meandering stream, and within are cutthroat ranging to trophy sizes.  By mid summer, these host a terrestrial insect population population second to none.   What a great river to test those storied terrestrial patterns!  From the river itself a small brown drake emergence  begins evenings soon after the  July 1st opening.  Emerging PMDs compliment the drakes.  A very few golden stoneflies and afternoon caddisflies round out the major aquatic insect emergence, except for late season BWOs.   So dry fly fishing is a  most enjoyable way to fish this section of river which weeds up in a manner similar to the Henry’s Fork in Harriman State Park.   But nymphs and small leech patterns produce along undercut banks, between weed beds, and deep holes here.  A four or five weight rod is ideal for presenting all these and a long, fine leader is necessary for dry flies.  So are rain gear, sun glasses, a shielding hat, and sun screen.  Tank up on water before venturing out, and bring enough to stay hydrated as no potable water is available except in the campground below. This is high country, hovering just over 6000 feet in elevation.  Afternoon thundershowers are common, and evening mosquitoes can be expected until early August.  By Labor Day evenings cooling enough to frost are possible, but the terrestrial insect population remains strong.  After mid- September a killing frost can happen any time.  By then, however, most of the locals are hunting and the non-locals are back to work or school.   That means you might be the only one fishing on the Management Area.