The year 2020 with a pandemic has changed a lot of things for many of us. One change noticed by Fish and Game was an increase to the amount of use that occurred on department owned and managed public access sites. The increased demand for recreational opportunities made it abundantly clear how valuable our public access areas are to sportsmen and women.

Fish and Game maintains 70 access sites within the Upper Snake. This year the focus was on making improvements to existing access points which needed some attention, including several sites in the Big Lost drainage. Here are some highlights from the past year.

Vaulted toilets were installed near the fishing pond at Mackay Hatchery. This new amenity is located near the visitor parking area and fishing pond and makes the fishing or sight-seeing trips to the hatchery more enjoyable for you and the family. This was placed in early spring and features an Americans with Disabilities Act (ADA) compliant parking pad close to the fishing pond so you won’t miss out on any of the family fun. After installing the new toilet at Mackay Hatchery, the maintenance crew worked on access sites along Mackay Reservoir. They fixed the boat dock at the Mackay Reservoir-lower site by fixing the anchor that holds the dock in place and cleaning sediment from off the lower portions of the ramp while low water levels in the reservoir allowed us to work in the “dry”. In the picture below, they are repairing the dock’s wheels that lets the floating dock roll up or down the bank as water levels change, allowing the dock to self-adjust during changing water levels to maintain the position of the dock at the edge of the water. One of the unique challenges faced this year was the need to reposition the anchor for the Mackay dock. After several years of wind and shifting ice, the anchor and the dock had moved to a point where the dock became dysfunctional relative to where the boat ramp is located. In the picture below, they are moving the concrete anchor block and dock back into the correct position using lift bags and scuba diving equipment. Once the anchor became suspended with the lift bags,  a boat was used to drag the anchor back to the correct position. Several updates were made to the Big Lost River-lower site. Truckloads of gravel were hauled in to repair roads and dead trees were removed from the campground making it easier to access and safer to use.

The Stennett Access site had the parking lot extended with a new turn-around area which will make it easier to load/unload small watercraft.

Additional camp sites were added to the Rothwell Access site with parking pads and an improvement to the roundabout, making it more convenient to pull campers into and out of the site.

Flow out of Mackay Dam is down to 51 cfs. This is really quite low for the river here and will concentrate fish into deeper water and make for easy wading.  BWO activity is ongoing during afternoons and hoppers are pretty much gone for the year. So resort to presenting BWO life cycle patterns and drifting small nymph and streamer patterns into the heads of deeper holes and runs.  Be ready for “brisk” weather. 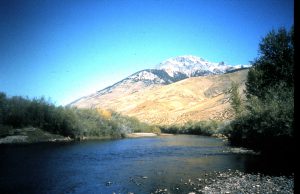 With flow (220 cfs ) just about where it should be below Mackay Dam, wading is safe. Afternoon BWO, all day midge and some hopper activities are attracting resident brook and rainbow trout.  Small nymph patterns, with and without a bead head, will always produce here. Look for cool mornings, but afternoons will be as comfortable for fishing as it gets.

With flow out of Mackay Dam around 260 cfs, wading is possible and safe. BWO, midge and terrestrial insect activity can make for good fishing.

With flow out of Mackay Dam about 450 cfs, wading in the river below is a bit tough. But with caddis, western green drakes emerging and terrestrial insects falling into the water fishing is good.

Flow out of Mackay Dam is up to around 450 cfs. This will make wading a challenge for now.

Flow below Mackay Dam has been around 350 cfs for weeks. That makes for stability. Now is the time of year when golden stones and western green drakes activities take place in the river.  Most folks coming from over from Sun Valley will be fishing the river above the reservoir.

With flow out of Mackay Dam around 350 cfs, wading the river below requires a bit of care. Afternoons feature BWO, caddis and some yellow sally activity. So life cycle patterns of these and woolly bugger patterns are working.

With 450 cfs coming out of Mackay Dam wading in the river below remains a bit tough.  Try San Juan and squirmy wormy type patterns during these and higher flows.

Most boat traffic now is on the Warm River to Ashton section of the river. But the most fish responding to the stone fly hatch is from Riverside Campground down to Bear Gulch with activity in Box Canyon coming on.  Look for boat traffic on these sections to be on the increase.   Give the lower river some more days before fish there begin looking for stoneflies again after digesting those from the early days of the hatch.  Fall River is putting in much run-off water. This will impact fishing below Chester Dam in the negative.