Interest in the Henry’s Lake fishery status stretches far and wide. Jenn Vincent, IDF&G Upper Snake River Region’s fisheries biologist is charged with monitoring this status.  Here is Jenn’s summary report giving an analysis and tracking of the lake’s 2020 ice fishing, a comparison with past ice fishing seasons and thoughts on the fishery status going into and expected for the 2021 open water season.

Over the past year, COVID-19 has created many challenges for each and every one of us. One thing is for certain, this year has proven how important outdoor opportunities are in helping us all to step away and recharge even if just for a few hours. It was evident that many anglers took the opportunity to get away this winter and fish the hard water at Henry’s Lake.

Henry’s Lake is known internationally for its trophy-sized trout. Anglers have the chance at catching Yellowstone Cutthroat, Hybrid (Yellowstone Cutthroat x Rainbow Trout), and Brook trout on Henry’s Lake. Although the lake is a great place to visit throughout the year, ice fishing is a great opportunity for anyone to fish without the need of a boat or specialized gear. Anglers can fish with minimal equipment and can access the lake easily by foot or snow machine from various public access points around the lake. It’s a great opportunity for the whole family to get out and try their luck at some trophy-sized trout.

During the 2020 ice fishing season, which lasted from October 26 through midnight on January 1, 2021, we conducted a creel survey to estimate how many hours anglers fished, how many fish they caught, and how many fish were harvested on Henry’s Lake.

Anglers caught an estimated total of 27,756 trout over the season and harvested an estimated 6,175 of these fish. Anglers harvested 22% of the trout that they caught. Yellowstone Cutthroat Trout was the most commonly captured trout at 46% of the catch, followed by Hybrid Trout at 42%, and Brook Trout at 12%.

Anglers fished the hard water this past year for an estimated total of 69,144 hours over the entire ice fishery. This compares to 34,511 hours during the 2019 ice fishery (Table 1). The total number of trout caught and harvested this season is most closely comparable to the 2013 survey although the 2013 catch rate is three times higher than observed in 2020.

Anglers caught an estimated 0.40 trout/hour through the ice which is less than the catch rate observed during the 2019 ice fishery which boasted a 1.28 trout/hour (Table 1). Our 2019-2024 Fisheries Management Plan for the state specifies that IDFG manages Henry’s Lake for a goal catch rate of 0.7 fish/hour. Henry’s Lake has had two consecutive good water quantity and quality years attributing to great water conditions, and fishing seasons have responded with good catch rates. We suspect the increase in angling pressure this year was related to recent good catch rates on the lake and impacts from the pandemic.

IDFG conducts a full season survey of anglers on Henry’s Lake every three years to better understand how the fishery is preforming. Our next season long survey will occur in 2022.

Overall, we estimated a two-fold increase in total angler fishing hours, a harvest rate lower than that observed during a recent open water season, slightly increased size in harvested trout due to increased overall sizes of trout in 2020, and a reduced total catch rate for the 2020 ice fishery on Henry’s Lake. Although the catch rate has decreased this season, Henry’s Lake still provides a unique opportunity for anglers regardless of season, gear type, and experience level to try their hand at pulling in a trophy-sized trout right here in Eastern Idaho.

Henry’s Lake is iced over enough that a few hardy folks are ice fishing. Yes, that’s a bit early, so Trick or Treat!

Air temperature  was way below zero in West Yellowstone Sunday morning, and area around Henry’s Lake was likely about the same. Ice formed around the edges making fishing from shore and boat launching nearly impossible. But look for melting as warmer weather is coming by the end of the week.

If the wind is blowing, you may as well bring a surfboard! In any case prepare for the weather the next several days. After weather calms down later next week fishing will be more comfortable and also quite good. 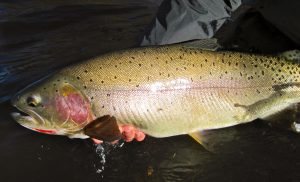 Because of windy days keeping many fly fishers off the lake, we do not a bunch of information to pass on.  Nevertheless, the passing of tough weather has a reputation for improving fishing here. So if and when the wind dies down, it it might be worth a visit to this usually great fall season fishery.  Henry’s Lake State Park is now closed to camping, but remains open for fishing and launching boats. These conditions are sure to bring in visitors, as is the case every year, but there is enough lake in front of the park to allow room for both shoreline and boat fishing. Fish seem to congregate here each year with nearby Howard Creek attracting brook trout and cutthroat and cuttbows staging close to shore.

These windy days make fishing tough on the lake. It might be best to find a place on the upwind side to fish for the sake of safety. Also get there at first light before it kicks into high gear. Fish are spreading around the lake thanks to our cooler weather, and fishing is good. Using an intermediate line, try any pattern Bill Schiess recommends for this time of the season in his book “Fishing Henry’s Lake.”

We have not heard much about fishing success on the lake other than it is OK. But we are now in the month when weather cools off and fishing picks up on the lake. That means we are sure to get information, so such will begin to trickle in.

Surf was up yesterday thanks to the high winds. White caps could be seen from surrounding roads. Conditions there today are likely similar. So be able to swim, bring your surf board and dress in a wet suit.  Surfing may be safer than fishing from a boat on days such as this!  Take weather into account when planning a trip to fish here.

We have not heard much about fishing success other than moderate sized cutts make up the bulk of catches. We do know that as the weather cools off fishing will improve with larger fish moving around the lake. However, look out for windy weather that can whip the surface in near breakers.

The lake is fishing fairly well for medium sized cutthroat trout responding to traditional Henry’s Lake patterns  (see Bill Schiess’s book “Fishing Henry’s Lake”). The water is still a bit warm, but with cooling weather the biggest fish will begin to leave the deepest water and move around the lake.