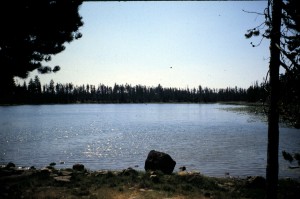 Grayling are tough to find in eastern Idaho. Your best chance of encountering them is in some mountain lakes further west toward Copper Basin and such high locations where they are present because of IDF&G stocking programs. You can also encounter them as wild fish in Yellowstone Park’s Cascade, Grebe and Wolf lakes where occasional individuals escape to the Gibbon and Madison rivers below.  Not far away in Montana wild grayling are also present in upper reaches of the Red Rock, Ruby and Big Hole river drainages.  Fishing all of these require some travel time.  There is, however, a near-by location in eastern Idaho that hosts a put and take grayling population.  That is Horseshoe Lake east of Ashton.  Take the Mesa Falls Scenic Route  (State Highway 47) east out of Ashton to the Green Timber Road, also known as the Cave Falls Road.  Travel east into Targhee National Forest past the Porcupine Creek and Rock Creek crossings.  About a mile past the Rock Creek crossing the signed road to Horseshoe Lake leaves on the left.  It is fairly well maintained and suitable for two-wheel drive passage after drying out from winter snows.  It accesses the north side of Horseshoe Lake and goes on to a youth correctional facility on the east leg of the pond.  Primitive camping locations dot the northwest shoreline where only primitive boat launch facilities are present.  Motorized boats are not allowed on the lake which has no surface outlet and inlet.  Float tubes and pontoon boats are the best bet for fishing here as the shoreline is mainly swampy or timbered.  Along with grayling,  put and take rainbows are present in the lake.  Midge activity is ongoing most of the season, but sometime in June damselflies will emerge to be followed later by speckled duns.   Beginning in the early season with damselfly nymph patterns, moving to dry damsel patterns and on to speckled dun life cycle patterns one can attract grayling the entire season.  Lilly pads dot some of the shoreline, and these locations provide a tip of where to concentrate fishing efforts.  Get out in front of the pads,  that host copious insects, and watch for active fish. Light weight equipment with a floating line is the name of the game here, and I really enjoy presenting with my two-weight system whether it is small nymph, emerger or dry patterns.  When grayling are active catching a few dozen is possible.  A braggin’ size grayling here is a bit over a foot long (but they are beautiful!) meaning that with their small mouths, small flies (#14 on down) are necessary.  You might encounter as many rainbows as grayling, and they range  a bit bigger.  If you camp here, you also have the option of a scramble down the rocks to Robinson Creek where few people fish. It’s a bit of a tough go, but company on the creek is doubtful.  Pocket water cutthroat and brookies will respond well just about any time to your dry and wet offerings here.  But if you are looking for some unique fishing in this part of Idaho, Horseshoe Lake’s grayling population offers it.