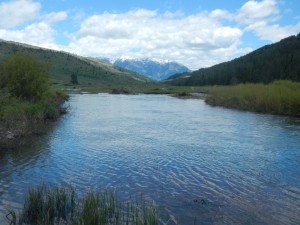 McCoy Creek is the most easily fished of the major Palisades Reservoir tributaries coming out of Idaho.  That is because a well-maintained gravel road parallels most of its length. As with Big Elk Creek (and Palisades Creek below the reservoir), a large and popular campground sits very near its confluence with Palisades Reservoir. McCoy Creek is approached from Idaho Falls by traveling US Highway 26 to Alpine Wyoming. From there one goes south out of town a few miles on US Highway 89, turns right on the McCoy Creek Road which crosses Salt River, skirts the southeast corner of Palisades Reservoir, then crosses McCoy Creek to parallel it upstream for several miles.

Entering the reservoir several miles southeast of Bear Creek, McCoy Creek is a significant run-off stream through draining Caribou Mountain and nearby high country. This means high and discolored water can make it difficult to fish in the early season. The most attractive locations to fish this stream are its meadow reaches that begin a few miles above the reservoir. Upstream of these meadows the stream flows through a small canyon, much like Bear Creek. Above this canyon reach the stream branches into tributaries, several of which host beaver ponds.  McCoy is also a significant spawning and rearing stream for cutthroat trout.  It is subject to catch and release regulations from December 1st until the opening of Idaho general fishing season. A daily limit of six salmonids applies, but no harvest of cutthroat trout is allowed. Other than cutthroat  trout, whitefish and a very few brown trout are present in most of the creek. Some brook trout, escaping from beaver ponds, may be present in upper reaches.

Winters of major snowfall can push the beginning of good fishing here past the general season opening on Memorial Day weekend. Lingering snow can also make the road paralleling the creek impassable into June, but early season fishing can be good as run-off diminishes and access improves. Streamer and large woolly bugger patterns work best in the early season.  Cutthroat having spawned will return to the reservoir but will take these flies when properly presented. Some of these returnees can exceed twenty inches in length.  However as water drops to base level by early summer, few large trout remain.  By this time the best fishing McCoy Creek offers begins. A good population of moderate sized individuals are present, and aquatic insect emergences attract them. Caddis, yellow sallys, and PMDs predominate with a few golden stoneflies, but as time advances through July, terrestrial insects become important food items. Lightweight equipment with a floating line and fine leader (4X-5X) are a best fit.  Long casts will not be necessary for success here.

Easily approached in its meadow reaches, and having a good population of eager trout, McCoy Creek is an ideal stream for introducing a youngster or entry level person to dry fly fishing. The same applies for a taking a physically challenged person fishing. Afternoon and evening hours are the best time for dry fly action beginning in July and going well into September.  The only disadvantage to fishing this stream is its distance from town compared to near equivalent creeks such as Palisades, Big Elk, and Bear Creeks.